Wide eyed laying in the dark I knew this morning was going to feel like one of the longest days I have ever felt.

I rolled out of bed and put on the clothes I folded neatly in a pile the night before. Looking down I saw the lights from outside my window hitting my bib number 8915. It was still pitch black outside and very early indeed. In a half asleep, drowsy state I got all my belongings I needed together and headed to the coach buses awaiting for all the runners in Athens to ship out to Marathon, Greece to the start of the marathon race.

As I kissed my boyfriend goodbye, I got onto the bus and looked around seeing all the people who had gathered together to head on a journey that they started years to months ago preparing. We drove out of the city passing hundreds of other runners getting onto more coach buses. We got to the outskirts of the city and headed towards Marathon. All I could think was this was the path of the adventure I am about to take and also, damn this is a long ways away!

We got to Marathon’s stadium and everyone was doing different things. They were either with their fellow friends who had convinced or agreed to run the race together talking in circles catching up or mentally preparing each other. There were professional runners who were running warm up laps and Athletic teams who were wearing all the same shirts stretching. Then there were individuals like me, taking in the sights around waiting for the race to start.

I wandered around for a little bit, sat down and stretched. I made sure I hit the bathroom and called my family and boyfriend letting them know I had only so much time before it started. I ate my snacks and mentally was soaking in what was around me, mainly the people who were participating and what was ahead of me. Then, all of the sudden, there were announcements letting people know to gather where their waves were. I headed in the direction of my wave and watched the masses get close together into herds.

It started to all become real when everyone was surrounding me and the first couple of heats to taking off. We were slowly shuffling forward and anticipating for our start. I got up to the start line and the announcer was talking in Greek then switched it to English. I looked over to my right and saw a man in a toga without any shoes on. In that moment I thought if this man can run a marathon without any shoes and succeed then I better be able to also! Then BANG, off to the races!

The start was a shuffle of moving forward and then a steady pace. The first couple of miles it was finding my own pace but following along with the other runners. Some runners were sprinting ahead while others I had to pass around. Within the first five miles I saw a lot of people pull over to the side and stretch out the muscles that were drawing tight. I ran along with a solid 10 minute pace the first half marathon, taking in the cow bells and people cheering “BRAVO, BRAVO!” During the first half I was constantly monitoring in my head, does my hamstrings feel okay, am I tired, do I feel any aches or pains. I watched my watch, making sure I was nearing each mile finishing towards my targeted pace.

After the first half my body was starting to tighten where my previous hamstring injury was. They were incredibly tight but I knew that they were okay. If I had stopped to stretch my whole momentum would stop and the race would become much more difficult. I continued along starting to space out and let my body guide me to the finish line. I realized how incredibly hungry I was around mile 14, the next couple of miles I was in desperate need of calories to relinquish the gnawing feeling in my stomach and the huge decline in energy. By mile 18 I was saved. They had a food stop with granola bars and chocolate. Incredibly drying to the mouth, I walked and devoured the food. I knew I had used up well over a 1,000 calories and 300 calories were just a little boost that I needed in the moment. I rotated between bites and baby sips of water. As soon as I felt like I had digested enough where it wasn’t sitting in my throat I started chugging a long again.

The two hardest components to the race were the weather and the elevation. The weather you can never really predict. You have an idea and range but that is about it. For my race day it was sunny and around 60, climbing higher in the afternoon. I was sweating and beat red from a sunburn I was getting. It played a lot in my fatigue and in the second half of the race it was directly above me with no tree or buildings to protect me from the scorching sun coming down. Then the second element was elevation. I never really took in how much elevation gain I was going to endure. I lived on an island the entire time I was training were there was no elevation gain. I knew I could not train for that aspect of the race so I figured just not to worry about it. Well little did I know the whole race was practically up hill. There was one hill however it continued to go, and go, and go almost to 2/3rd of the race. No wonder my legs were tight! I knew they were elements out of my control and I just had to continue to run no matter how I felt about the circumstances I was in.

After mile 18 my average pace was 12:30, I had a while to go still and I put my body into cruise control. I knew this was the pace that would carry me through to the end regardless of the hill that I continued to climb, the heat I was facing or fatigue that was growing with each mile.

During the last part I was very fortunate to have two saving graces. They had no idea how much they helped me during the last quarter. I found them soon after I had ate and they became my pacers. I knew that they were working together to keep a steady pace which felt perfect for me. I always kept my sight on them and a distance where I wasn’t in their space. They helped me keep a mental focus, one step in front of the other and my moral up. I would lose the two girls during the water breaks but soon to find them shortly after. It was a miracle that I found them because every kilometer they would high five each other and in my mind I felt that extend to me too. I believe that is what got me through the killer 20’s however in the last two miles I lost them.

Who did I find though the last two miles, the toga guy who I saw at the very beginning of the race!! I thought to myself “WOW, I am going to finish this race because HE IS TOO!” I ran up to him and asked if his feet were killing him, his response “well something is going to hurt!” He was from Australia and remarkable to say the least. The last two miles were painful but we had gotten into the city. Athens was making the last leg fly by and before I knew it I was looking at the stadium ahead of me. I had a mixture of feelings, thankful to have made it, anxious to finally get to the end, nervous to find my boyfriend between the masses of people with only 3% battery left on my phone and exhilarated by the hundreds of thousands cheering on the runners. I rounded the corner and only had meters to the finish. I looked to my left and of all people who did I see but my AMAZING boyfriend there in the crowd. Cheering me on. Right after that moment, I finished the race! I looped around the arena and received my medal. Holding it in my hands was unreal, I put it around my neck and embraced the weight of it. I grabbed some snacks that they were handing out and waiting for my boyfriend to catch up.

He was adorable with sneaking a picture of me through the crowds of people as he approached me. With a hug and kiss I was done. My body hurt and I needed to rest. We walked another mile back to the hotel and I immediately took a shower. Looking in the mirror I had a moment. My body, my mind and my will had brought me to this point. I had prepared for this marathon months in advance and here I was standing in the mirror looking at someone who not only set goals for herself but accomplished them.

My boyfriend was incredible and brought me down stairs where he surprised me with a massage. My whole body for the next hour was soothed, then I sat in a heated seat sipping tea breathing in the herbal essence, listening to soothing waves and taking in the moment. It felt like I was there for eternity when I gather my strength and went back to the room. He was back in the room patiently waiting and we got ready to head to dinner.

We first headed upstairs to our rooftop bar for a toast. We had champagne which tasted so delicious after a long day, the bubbles gliding up to the top just to burst on the surface. We sat for a little talking to the bartender who we befriended and soon after headed out into town. We took a taxi to an area where we heard was a lot of fun, and where you get a good bite to eat. We found this adorable restaurant with delicious food. It was called Soho Bar, I got their Carbonara while my boyfriend got their pizza. We devoured our food and headed to a hookah bar. I got a pina colada along with a buzz from the hookah. I definitely don’t encourage smoking but when in Europe a hookah bar is the place to go! Between the atmosphere and drinks, I snuggled beside my boyfriend taking it all in and to think hours ago I had embarked on one of the hardest things in my life.

We headed home and ended one of the most amazing days of my life. It is a day that will never escape my mind and I will forever hold close to my heart finishing my second marathon! 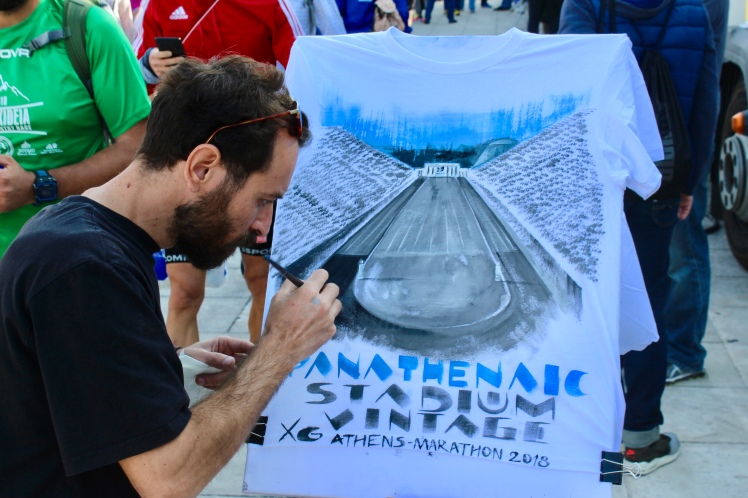 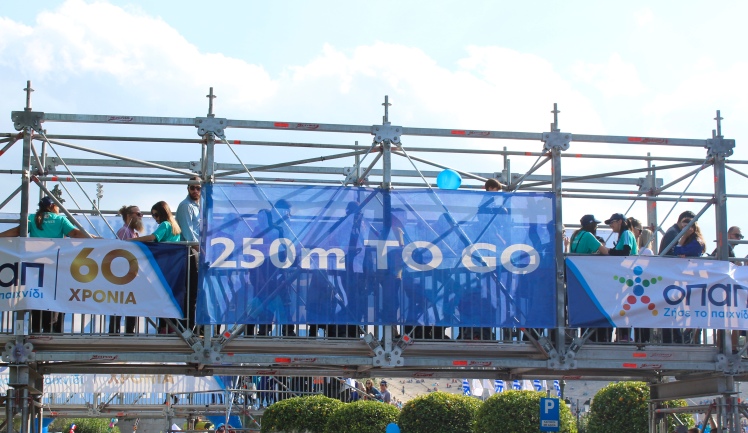 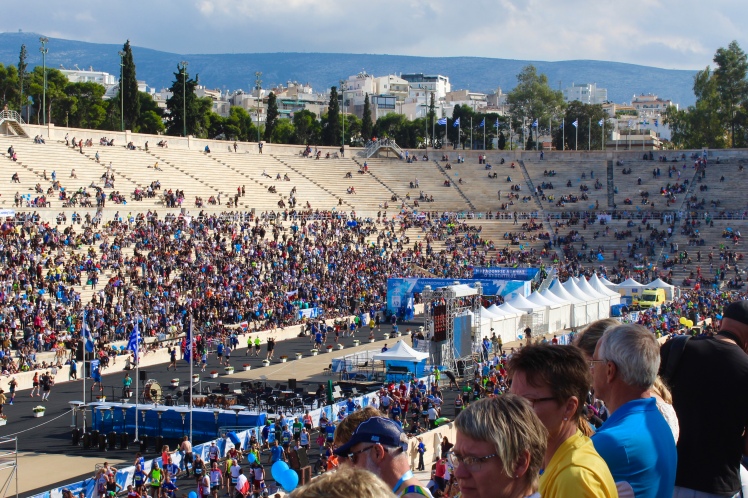 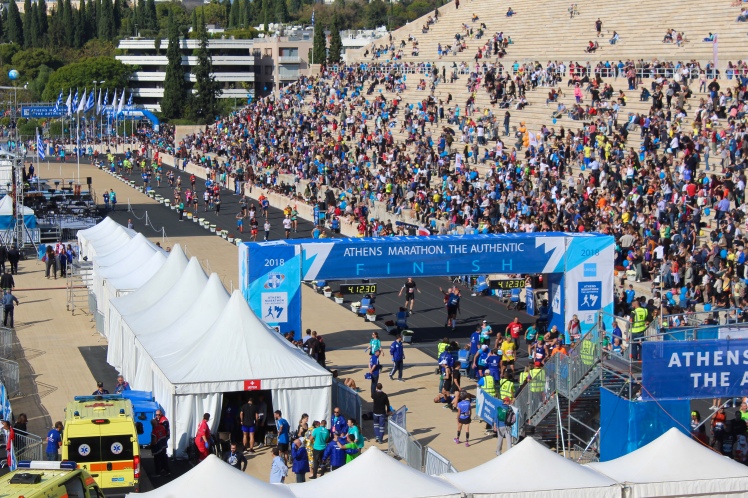 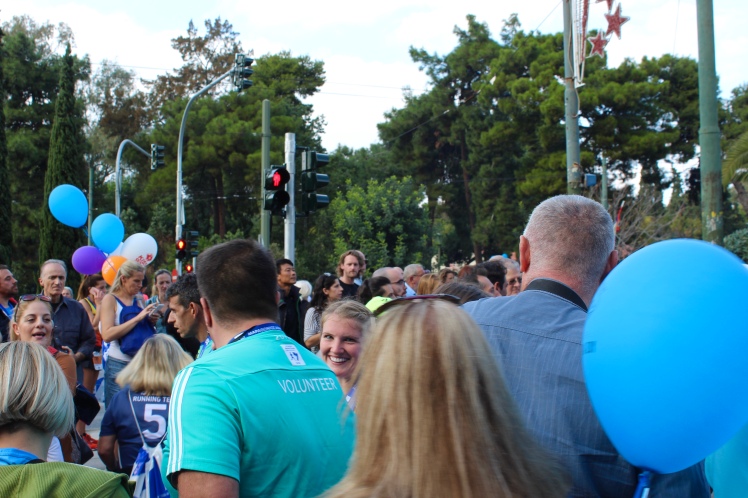 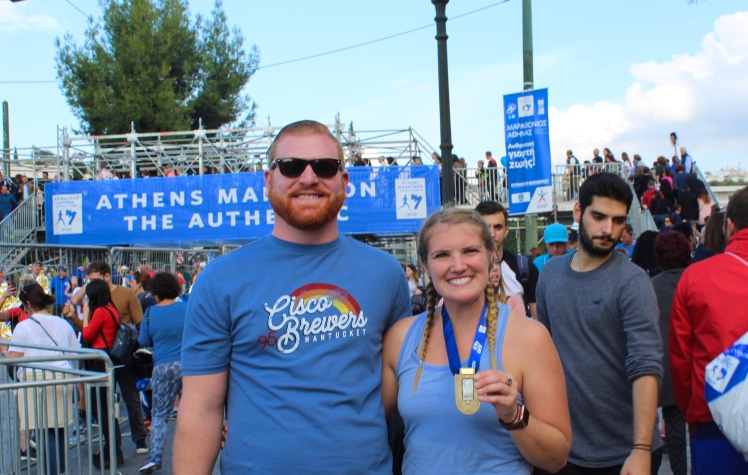 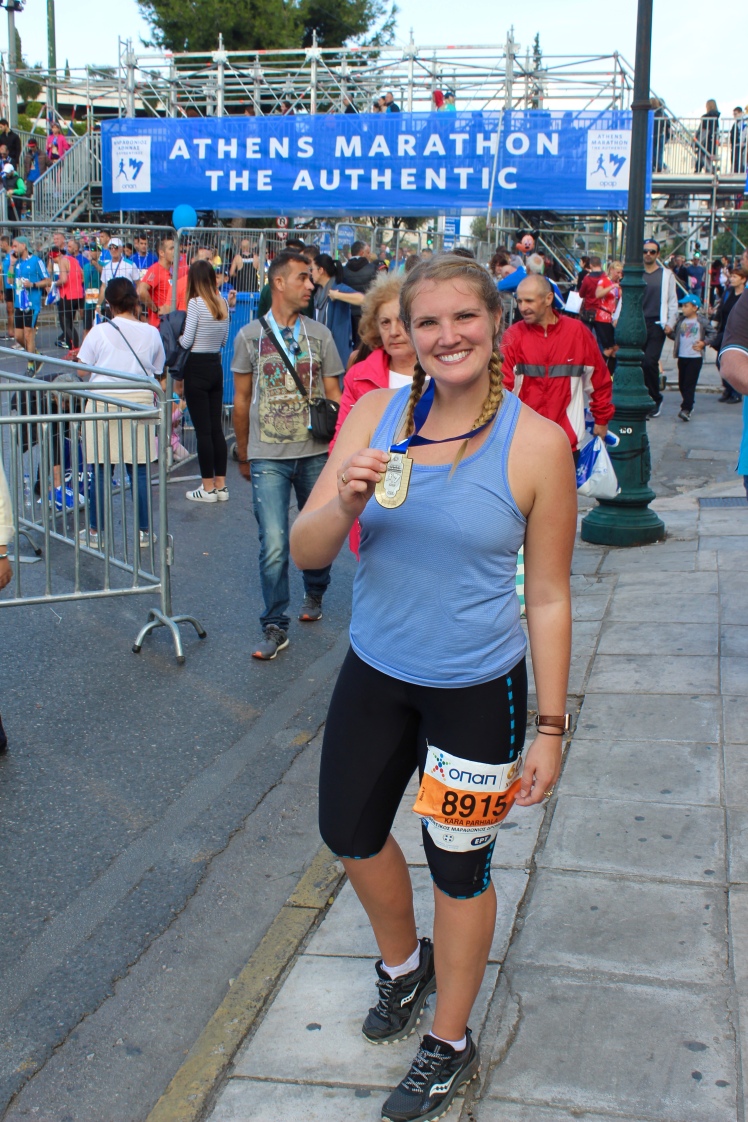