Waking up in another country is dreamy.  I think I am waking up in my own bed, but as my eyes drift open I feel the stiffness of the hotel bed beneath me. As I widen my eyes, my surroundings are unfamiliar and foreign. I am pleasantly reminded I am not at my home. I am half way around the world in Lisbon, Portugal for my first full day which is an exhilarating feeling. As I look over to see my loving boyfriend slowly waking up also, I think of how grateful I am to have such an amazing man beside me to experience this with.

As we got ready for the day, we went into it as an open book, no real plans but to explore what Lisbon has in store. We walked out of the InterContinental hotel refreshed and meandered towards the waters edge. Lisbon is a hilly city with buildings of all different sizes and heights. As we walked through the streets we were led around, down and up hills and stairs. We passed through the main streets that brought us to the Praça do Comércio which is a magnificent arch leading you to the plaza that once was destroyed by an earthquake. Now it is a wide open area which opens up to the Tagus river. We walked along the river and took in the views of the bridge that looked like the bridge in San Francisco and the statue of the Christ the Redeemer in Rio De Janeiro, Brazil. As we were strolling along I met a wonderful jewelry maker. Her work was outstanding. As she was making it front of me I was memorized by her talent as she bent the metal to make intricate designs that would lead to either earrings, necklaces or bracelets. I got three pairs of earrings and I have to say I was in love! As we were continuing our walk, I made the OH-SO-SILLY mistake of looking at Google maps for walking directions to the Tower of Belem. It said 18 minutes. As we were walking, the bridge was not getting any closer than when we had started and it was after the bridge. After a solid 20 mins walking, Kevin questioned my 18 minutes… turns out we were 18 mins driving. From the point we had walked to the point we needed to be we still had another 4 MILES. Needless to say we ordered an Uber. I laughed pretty nervously as I looked at my boyfriend who simply rolled his eyes.

The lady who picked us up at our location was simply amazing. She was wonderful with her stories and what we must see once we were in the area. She told us history and significance of the buildings. As we were arriving to our destination, she told us she was going to pull up a little further ahead if we did not mind. We did not. She pulled over in a location where in all directions there was something to see. She pointed in front there was the Jerónimos Monastery and the Museu de Marinha which which was a gorgeous Monastery with a maritime museum. To the left and through the trees there will be the Padrão dos Descobrimentos which is the Monument of the Discoveries, celebrating the 15 and 16th-century Portuguese explorers and visionaries. Lastly, she described not too far ahead was the Belém Tower which was built to defend the city.  As we were were at our destination Pastéis de Belém in which she directed was behind us, she told us to get their custard cakes. She said they were small and 6 was simply not enough and to get two cases. We thanked her as were getting out and I wished we had her all day to be our tour guide because wow what an experience for a little over ten minute ride!

We started to realize how hungry we were as we walked over to Pastéis de Belém. As we stood in line I realized I had no idea what to order and just told the woman behind the counter I wanted two cases. Within a second she handed me two hot cases and pushed me along so she could get to the other person in line. It happened so quickly and I just looked at Kevin. He looked at me and we started digging in. They give you cinnamon power and confectionary sugar. I put the sugar on top of mine and took a bite. It was so warm and the custard had such a deep rich flavor. As it melted in my mouth I could see why there would be lines out the door and around the corner for these babies. They were simply DELICIOUS. After my second custard cup we started walking towards one of the destinations our Uber driver talked about which was the Monument of Discoveries. As we approached in front of the statue there was a stunning marble map of the world laid on the ground symbolizing Portugals discoveries. We went to the top of the monument and the view was breathtaking. As you look towards the city you see the buildings scaling the hills and the beautiful garden Praça do Império which lied in front of the Monastery. As you look towards the river once again we saw the 25th April Bridge which is the longest suspension bridge in Europe, and also was Lisbon’s first and also the National Sanctuary of Christ the King. As I was admiring everything around I looked at Kevin. He asked if I was done and I was astonished. It felt as if we just got up there and I asked if he was scared of heights. He is! I was laughing because he works in an ATC tower yet he has a fear of heights I would have never put those two together. We made our decent and headed to the next site.

We walked through the gardens and Kevin decided to polish off the last two custard cakes by “chubby dumping” them into his mouth which I could not stop laughing. We took in the sights of the monastery then went in the direction towards the Belém Tower. The sun was going down and the tower was soon closing for the evening. Kevin and I slipped in with ten minutes to spare. As we walked across the draw bridge to the entrance up the the tower the height was surprising, the architecture was transcendent and I completely was in awe. The sun gave way to the horizon and the evening left colors of blues, purples, and pinks in the sky. It was romantic to be one of the only individuals left in the tower experiencing this place. As we were in the tower that “served as a point of embarkation and disembarkation for Portuguese explorers and as a ceremonial gateway to Lisbon.” (1) It was symbolic to me to think that we are apart of history. We as individuals come and go through the city leaving with memories and taking pieces of their history home to share.

After being one of the last people to clear out of the tower we headed to Darwin’s Cafe, which was suggested by Kevin’s mother and it so happened to be down the road from us. We sat down for a bite to eat and enjoyed a bottle of wine with clams, pork in a white wine sauce and a delicious cheese plate with jam that just bursted with flavor. We recapped the day and just enjoyed the atmosphere around us. It was a perfect winding down from the long day of walking. Once it got dark and the stars came out we decided to head back to the hotel. As we called the Uber, we were astonished. It was the same lady who had brought us to this area! We were so excited to share with her what we had seen. As we got into the Uber, a surprise for her also we shared our adventures and she shared even more things to do the following day.

Once back at the hotel we kicked back for a little and decided that we needed to rally and check out the Christmas market which was directly across from the hotel. As we wandered down, my excitement was bubbling. One of my favorite things about Europe are the Christmas markets. As we entered, it was bustling with energy. People all around, little huts filled with knick knacks and goodies, and a ferris wheel to top it off. As the Christmas music was in the air, I was thrilled to walk up and down the streets getting snacks and ginja shots which is cherry liquor in a chocolate shell. We started off with a few ginja shots which were so tasty and delicious and went into a garden with teepees lit up. It was exciting to share this experience with Kevin with magic in the air. As we made our way through the market, everything was shortly closing up. Kevin got a traditional pork sandwich and we headed back towards the hotel. We went up to the room with sleepy eyes and heavy feet. We decided to kick them up and stay in for the night. I closed my eyes and looked forward to once again a fun filled day to come in Lisbon. 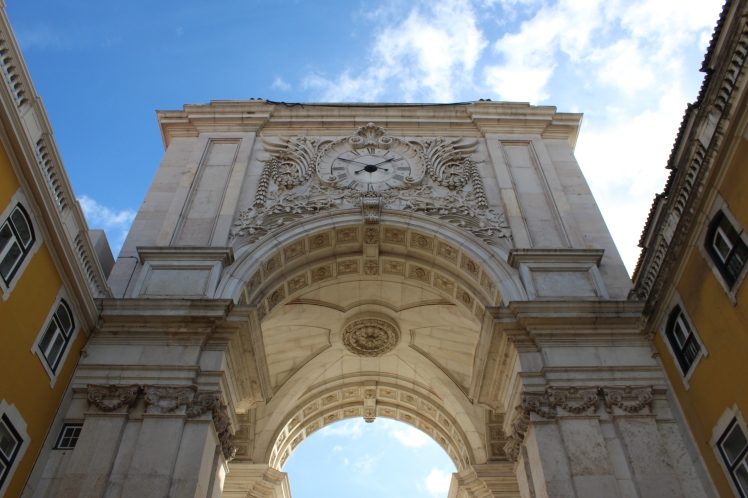 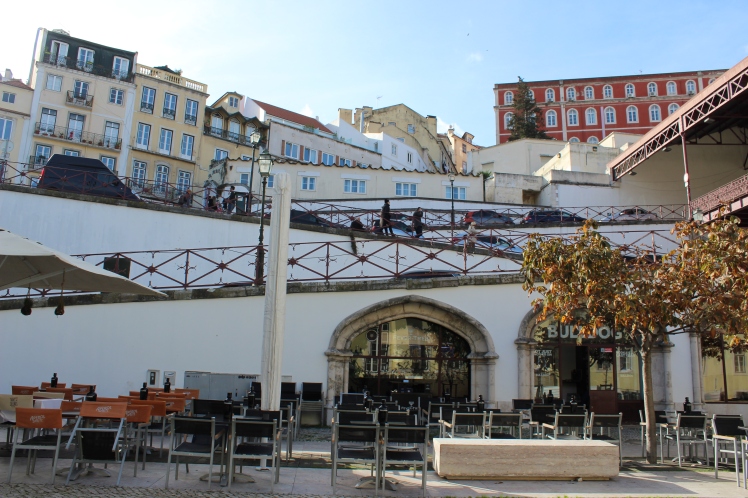 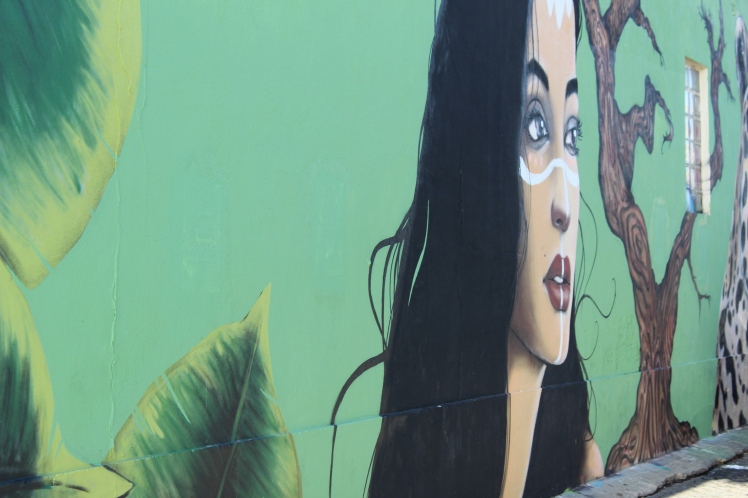 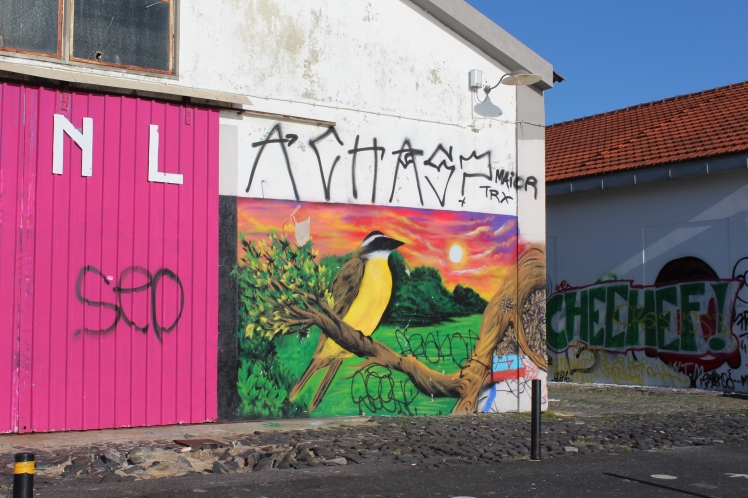 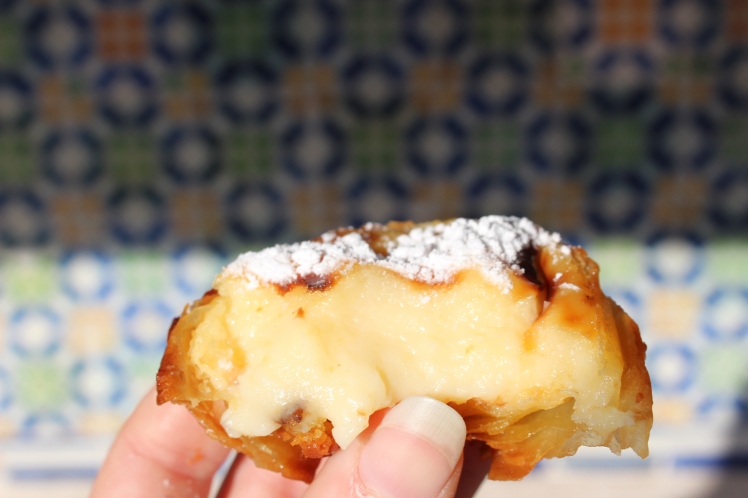 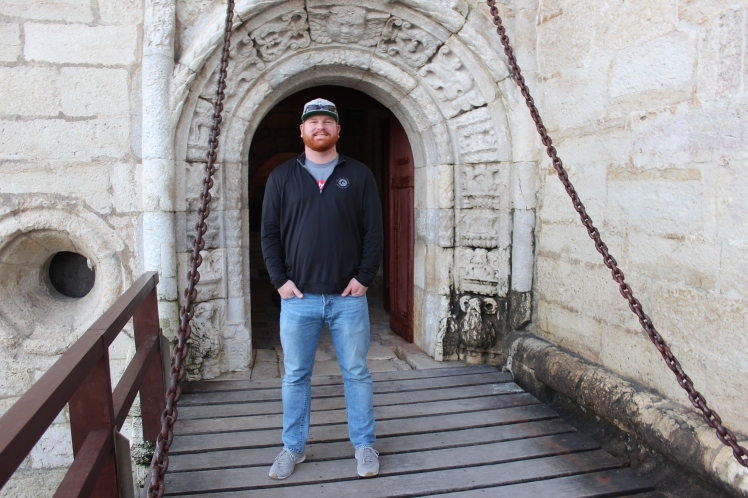 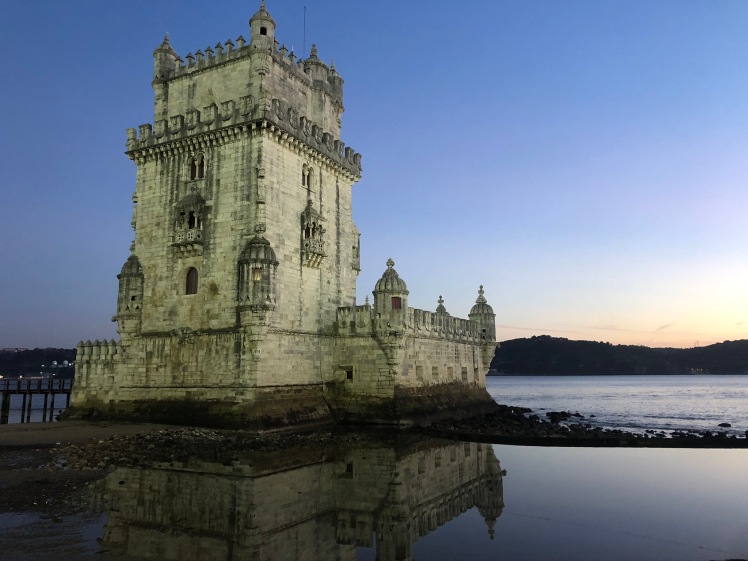 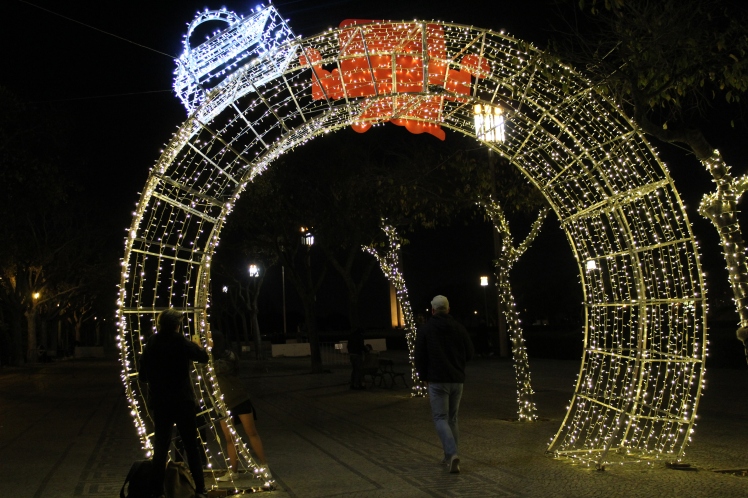 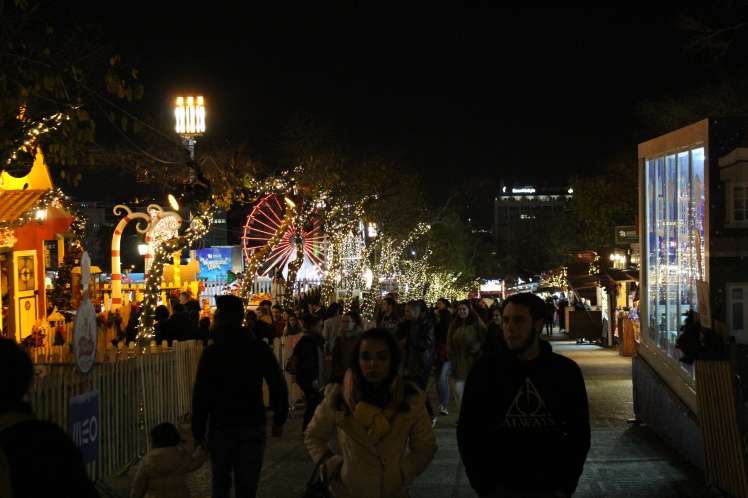 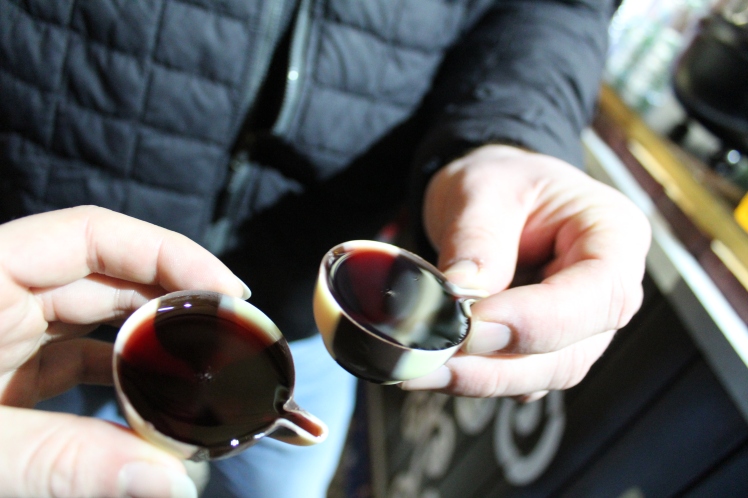