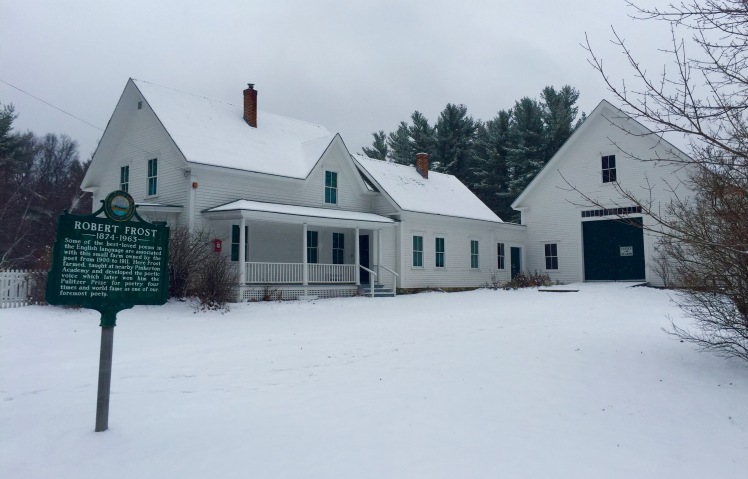 As I woke up the ground was covered with a blanket of white snow. The snowflakes were dropping ever so slightly that created a whimsical sense of the holidays to come. I was eager to get outside and capture the beauty of this morning. After a warm cup of coffee, I headed out to Robert Frost Farm. All the years I’ve lived near the farm, I have yet to explore the historical landmark. It is rich in history and the property played a significant role in his poetry.

As I arrived, there was only one set of footprints that were left through the back trails. As I was running with Brutus, we followed the trails that have already been walked along. Then as we came back around, we went back through to find new trails that have not yet been explored. All I could think of as we made our own trails was his poem “The Road Not Taken.” It played upon Robert Frosts’ friend Edward Thomas and his inability to make decisions. But as it is read so often by others there are other meanings to the poem. It is interpreted as a celebration of individualism and creating a life that is separate from the norm. The title “The Road Not Taken” is read as signifying in life you are given forks and you have to decide which path to take. However, as you walk down the path you have chosen you will question or wonder the irrevocable loss of the road not taken. There is no turning back to start over. It is a masterful and beautiful piece of work written by Frost. If you follow the link it will give you more of an overview of the history and true meaning of the poem.

I hope I inspire you to take a run or walk around the historic sites near you. Explore the landmarks and put yourself in their shoes. Imagine yourself set back in the years that they had lived there and how they were inspired from what was around them.

“Some of the best-loved poems in the English language are associated with this small farm owned by the poet from 1900-1911. Here Frost farmed, taught at nearby Pinkerton Academy and developed the poetic voice which later won him the Pulitzer Prize for poetry four times and world fame as one of our foremost poets.”